Erected following the end of “the war to end all wars”, the City of Lorain’s World War One Victory Monument in Lakeside Park was beginning to show it’s age and decades of wear from Ohio winters.  Enter to the rescue, Eagle Scout Candidate Michael O’Brien of Boy Scout Troop 159 from Bay Village, Ohio.  While visiting the area with his parents he noticed the deteriorated condition of the monument and the flower bed near the park dedication plaque.  This would be the perfect Eagle Scout project he needed to give back in service to his community.  Michael reached out to NEOPAT for support and we answered the call providing the clean up materials, paint, and garden mulch for the project.  Using his leadership skills to gather a team of fellow Scouts the work began in earnest during some of the hottest days of early June.  It took Michael and his team four full days to strip the monument and another day to repaint it.  When completed, the monument looked as good as the day it was dedicated some 80 years ago.  Michael was recognized for his efforts by the Lorain Port Authority which now controls the park.  Outstanding work Michael and as all Scouts say, “Stay On The Trail!” 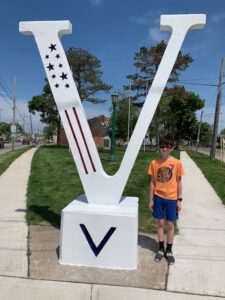 Eagle Scout Candidate Michael O’Brien stand next to the restored the restored World War One Monument in Lorain’s Lakeside Park.